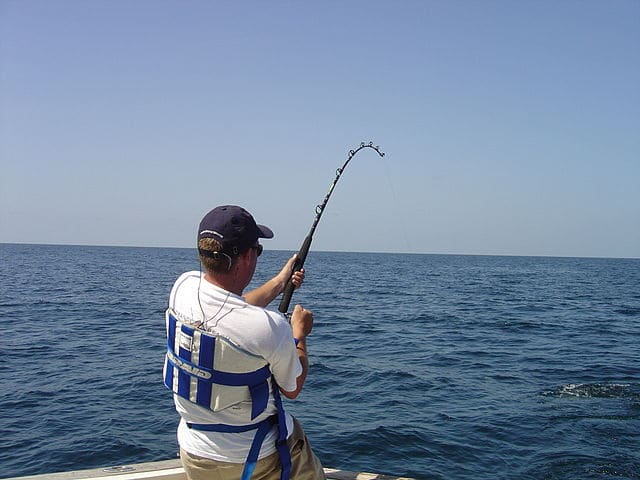 The Gulf of Mexico is full of thousands of fish and shark species. Many people wonder, when booking a fishing trip with Just Cast Charters, what kind of fish are in season in the warm waters at that time. In order to provide convenience to our customers, we have made a seasonal fishing guide that you can reference below, when you want to know which fish are in season for your Galveston Island fishing charter:

February-March: Most fish in the gulf choose to inhabit this space because the water stays warm for most of the year. However, in February, when the waters are less than warm, many of the native fish to the gulf migrate to warmer waters. One fish that has been known to stick it through the temperature change is the Yellowfish Tuna. In addition to Yellowfish Tuna, Amberjacks are open season all the way until the first of July and are often found in the same areas. Vermillion Snapper, Grouper, Tilefish, and more are open to catch all year, they just may not be in as robust of supply during this month.

April-May: In April, the water begin to warm up again. With this change, there will be an increase in fish moving back into the Gulf to call it their home. Cobia come into season as well as many other species of fish. Smaller bait such has Cigar Minnows and Threadfin Hearings will being to populate, bringing in the larger fish such as King Mackerel, Spanish Mackerel, Red Fish, Sheepshead, Flounder and Speckled Trout. Farther offshore, where you can find the tunas, there will also be Mahi-Mahi and Wahoo.

Deeper into April, leading into May, you will notice the triggerfish begin showing up in large numbers and get pretty big! Mingo’s and white snappers will begin to enter the gulf waters and make for great catches!

June: Red Snapper Season is officially open, meaning Amberjack season is closed! This season lasts for approximately 45 days but does not have an exact set timeline. The National Marine Fisheries Service will determine how much and how long we can catch Red Snapper.

July-September: Gag Grouper season begins on the first! Red Snapper season will be going until the end of October and this will dominate a lot of fishing interests. The warm gulf waters are filled with Blue Marlin, Sailfish, Dolphin and wahoo as well as all of the species of Tuna. This is notoriously the most popular time to go fishing! Schedule a fishing charter now! Amberjack reopens at the end as well and makes for great fishing!

Whenever you are in the Galveston area and you are looking for the most exciting, all-inclusive fishing charter service, choose Just Cast Charters! We make it easier than ever for you and your friends and family to get out on the water and catch some fish! You show up and “Just Cast!” we do the rest! Contact us today to plan your next adventure!

This author hasn't yet written their biography.Still we are proud Chris Berry contributed 33 great entries.

All the way from Canada, Spencer got in on the November action down here in the Gulf!! Yes we fish year round!! Book your trip!!